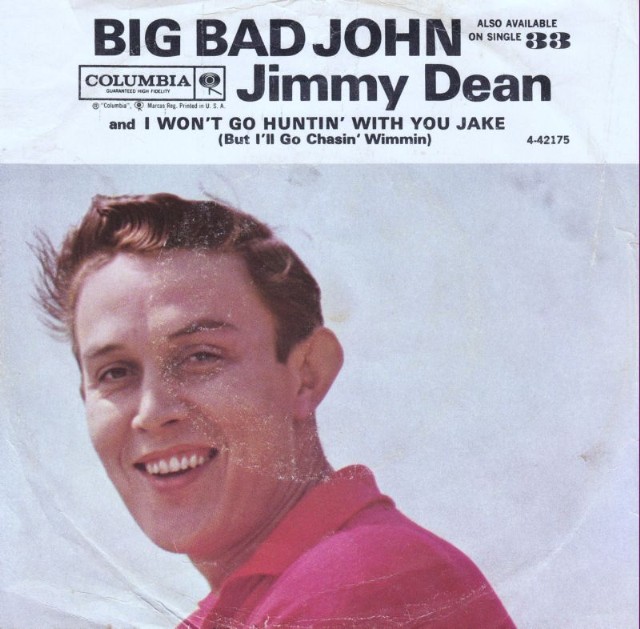 When I think of Jimmy Dean the first two things that come to mind are “Big Bad John” and his sausage company- although I am certain that I never ate any of his company’s product. They are still running his voice over on the commercials ten years after his passing.

I don’t know if off the top of my head I could name another Jimmy Dean recording other than “Big Bad John.” I also didn’t know that he wrote the song in collaboration with country legend Roy Acuff. “Big Bad John” won Dean a Grammy for Best Country and Western Recording 1962 and it was nominated for Song of the Year. “Big Bad John” just fell short of reaching #1 in the UK- #2 on their singles chart.

“Big Bad John” came along at the right time for Dean- Columbia Records was at the time considering dropping him because he hadn’t had many hits of late. On a airplane flight from New York to Nashville Dean knowing he needed another song for an upcoming recording session wrote it- and took it to Acuff who helped polish it up. The inspiration for “Big Bad John” was actor John Minto- who stood 6’5″. Dean had met Minto while doing the play Destiny Strikes Again. Dean would call him Big John .Floyd Cramer who  was brought in to play piano on the song is the one who came up with the idea of adding the hammer and steel-instead of the piano.