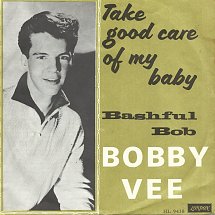 The producer Snuff Garrett was looking for material for Bobby Vee to record and stumbled across a demo of this song by Carole King- who along with her then husband Gerry Goffin had written it. Garrett thought that the song needed an introductory verse and met with King and that was taken care of. Some great musicians on this recording- Little Richard’s drummer Earl Palmer, jazz guitarist  Barney Kessell and Howard Russell both members of the famous Wrecking Crew of Los Angeles musicians and Tommy Allsup who  had played lead guitar on Buddy Holly’s ‘It’s So Easy.’ “Take Good Care Of My Baby” also went to #1 on the UK Singles Chart. This was Vee’s only #1 hit.

Bobby Vee- was born in Fargo, North Dakota as Robert Velline. After Buddy Holly was killed in the plane crash on The Day The Music Died- the show went on- and Vee and his band The Shadows filled in the next scheduled show in Fargo. Vee had 38 Hot 100 chart hits from 1959-70- 14 of them make the Top 40. Vee died at the age of 73 in 2016 of Alzheimer’s disease.

The Beatles when auctioning in 1962 for Decca Records- recorded a version of “Take Good Care Of My Baby”- with George Harrison on lead vocals. Decca rejected The Beatles and signed Brian Poole and The Tremeloes instead.

There is a connection between Vee and the great Bob Dylan. Early in his career Vee met a musician- Robert Zimmerman who called himself Elston Gunn- Gunn/ Dylan toured briefly with Vee’s band and over the years has written many complimentary things about Vee- including this from a 2013 concert in St. Paul, Minnesota.

“Thank you everyone, thank you friends. I lived here a while back, and since that time, I’ve played all over the world, with all kinds of people. And everybody from Mick Jagger to Madonna. And everybody in there in between. I’ve been on the stage with most of those people. But the most beautiful person I’ve ever been on the stage with, was a man who is here tonight, who used to sing a song called “Suzie Baby”. I want to say that Bobby Vee is actually here tonight. Maybe you can show your appreciation with just a round of applause. So, we’re gonna try to do this song, like I’ve done it with him before once or twice.