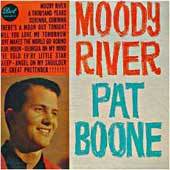 How could a music listening./ buying public which put a streak of great songs like “Surrender”- Elvis, “Blue Moon” -The Marcels, “Runaway”- Del Shannon, “Mother-In-Law”- Ernie K-Doe, Travelin’ Man”- Ricky Nelson and “Running Scared”- Roy Orbison in the spring of 1961- also send this crap to #1? Neil Young would a decade later sing that “Even Richard Nixon has got soul.”- I am not sure about Pat Boone- the most soulless singer in history.  This was the 6th and final #1 hit for Boone. One of the many great things about The Beatles and The British Invasion is it ended Boone’s time in the Top 40. Can anyone think of anything more square than being a Pat Boone fan?