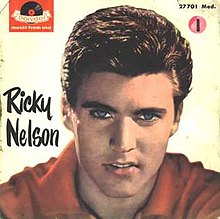 Songwriter Jerry Fuller wrote “Travelin’ Man’ with Sam Cooke in mind but Cooke’s manager wasn’t impressed and the song was passed along to Ricky Nelson who loved it. Nelson would have a double sided hit- with “Travelin’ Man’ going to #1, Nelson’s second and final #1-  and the b-side:”Hello, Mary Lou” peaking at #9. Nelson used Elvis Presley’s backup singers The Jordanaires on the song as he often did. Playing guitar the legendary James Burton.