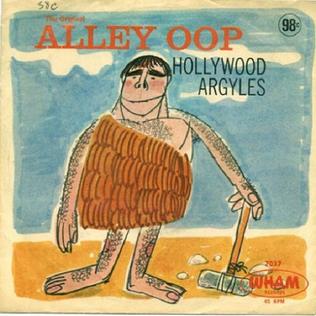 “Alley Oop” was written in 1957 by country musician and songwriter Dallas Frazier [who also wrote the awfully annoying “Elvira” which the Oak Ridge Boys had a huge hit with .} “Alley-Oop” was inspired by the comic strip of the same name created by V.T. Hamlin. A one-hit wonder- the Holywood Argyles only appearance in the Hot 100. Produced by Kim Fowley who later was the mastermind behind The Runaways. “Alley-Oop” peaked at #24 on the UK Singles Chart.