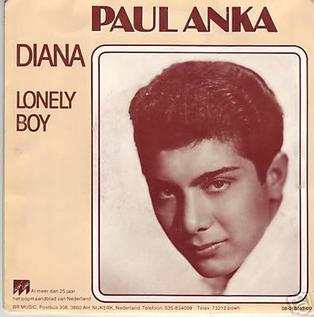 Oops yesterday I skipped over this turkey and went to #17 Elvis Presley’s “Big Hunk O’ Love”- so I do have to back track and play #16 before #18 tomorrow.

Canadian Paul Anka was just seventeen when he hit #1 with his second chart topper-“Lonely Boy”- his first had come a year earlier with “Diana”- he would have a long wait until his 3rd #1- 1974 with “You’re Having My Baby” one of the worst pop songs ever. In between Anka wrote the theme for The Tonight Show and “My Way” for Frank Sinatra.