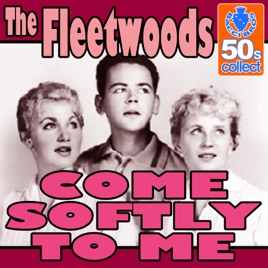 “Come Softly To Me” -The Fleetwoods when I hear it- I immediately think of the 1986 movie “Stand By Me” in which it is featured on the soundtrack. The song was originally called “Come Softly” but Bob Reisdorf of Dolphin Records considered it to risque so he changed it to “Come Softly To Me”- the title phrase which doesn’t appear in the lyric. The song was recorded a cappella with just Gary Troxel’s  shaking car keys- then it was sent to Los Angeles where a they added a little instrumental accompaniment was added-including a little acoustic guitar by Bonnie Guitar. The Fleetwoods- from Olympic, Washington would have a second #1 in late 1959- with ‘Mr. Blue.”