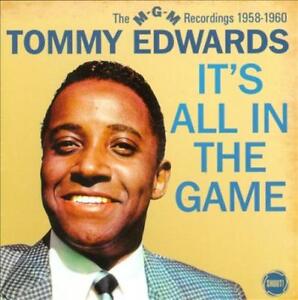 “All In The Game” is the only #1 hit ever written by a Vice President of the United States. The music was composed by Charles Dawes [ who also on a Noble Peace Prize} he was Vice President for Calvin Coolidge. Before he was VP- in 1911 he wrote “Melody In A Minor”- the lyrics to the tune was written in 1951 by Carl Sigman. Sigman wrote the lyrics in the summer of 1951- Dawes had died that April. It was recorded that year by four artists- the most successful being by Tommy Edwards- it peaked at #18. Fast forward to 1958 Edwards had one session left in his contract with MGM and decided to do a stereo version of “All In The Game” with a rock and roll arrangement. It became a big hit not only in the US but it also went to #1 on the UK Singles Chart. It also went to #1 on the R&B chart in the U.S.  Over the years it has become a pop standard and has been covered by many artists-the hit versions being #25 Cliff Richard in 1964 and The Four Tops #25 in 1970. My favorite version is Van Morrison’s cover on his great “Into The Music” album in 1979.