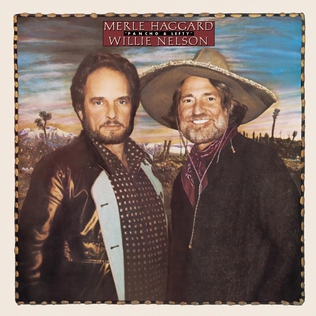 Three Chords and The Truth: Essential Country Music Songs: “Pancho And Lefty”-Willie Nelson and Merle Haggard. On my short list of favorite country songs- “Pancho And Lefty” was written and recorded by the late Townes Van Zandt on his 1972 album ‘The Late Great Townes Van Zandt. The song had been recorded by others including Emmylou Harris and Hoyt Axton before Willie and Merle got their hands on it and turned it into a #1 country hit in 1983. This weekend on the way to Gettysburg I was listening to Willie Nelson’s box set- and when it came to this song I had to keep playing it back over and over. Yesterday in going through a bunch of albums at an antique store- I found the vinyl album “Pancho and Lefty” by Willie and Merle-in mint condition for $1. {My other great find was Johnny Cash’s iconic “Bitter Tears” for one American dollar.}

Townes told a great story once about how “Pancho and Lefty” got him out of trouble one day  “We got stopped by these two policeman and…they said ‘What do you do for a living?’, and I said, ‘Well, I’m a songwriter’, and they both kind of looked around like ‘pitiful, pitiful’, and so on to that I added, ‘I wrote that song “Pancho and Lefty”. You ever heard that song “Pancho and Lefty”? I wrote that’, and they looked back around and they looked at each other and started grinning, and it turns out that their squad car, you know their partnership, it was two guys, it was an Anglo and a Hispanic, and it turns out, they’re called Pancho and Lefty … so I think maybe that’s what it’s about, those two guys … I hope I never see them again.”

Below is the Willie and Merle video- also a clip of Townes playing it and then Townes telling the story of how the song was written.

Townes Van Zandt appears in the video of Pancho and Lefty.

“Pancho needs your prayers it’s true, but save a few for Lefty too. He just did what he had to do and now he’s growing old.”