As the story goes- in November 1966 Paul McCartney left a Beatles recording session angry at the other members of the band and drove away from Abbey Road studio in a rage. He’s speeding- Paul is instantly killed- decapitated in the crash. What do The Beatles do? If they announce the truth- that Paul is dead it will not only cause grief around the world- it would hurt the band, how would the world view The Beatles without Paul? It may hurt their popularity. The remaining Beatles decided they wanted things to go on as before so they have a Paul McCartney look- a- like contest. The winner a William Shears Campbell of Edinburgh is nearly a dead ringer for the dead Paul. Could that picture above be William Campbell after a little surgery to help him look more like Paul? After this period a couple things happen- The Beatles quit performing live. Their last live concert was in August 1966 before the death of Beatle Paul. Also for the first time “Paul” grows a mustache. The Beatles then train their new member to impersonate Paul. The Beatles feel guilty about duping their fan base in this way and decided that they would leave clues in songs and on album covers and photos.

Now it is established that the tragedy happened in November 1966– but many believe there were clues before Paul’s death.

The original cover of The Beatles “Yesterday and Today” album is below-the album was released on June 20, 1966 in the U.S. Capitol Records pulled the cover before release and replaced it. The controversial ‘butcher’ cover- replaced by one John, George and Ringo standing over a Paul who is sitting in a trunk. If you turn the album it could well look like Paul in a coffin.

Back to the ‘butcher’ cover- all the baby parts are resting on Paul. George is holding one baby head up- does this signify it was George’s idea? The doll is also decapitated- as Paul was in the car accident. On Paul’s right forearm what do you see? False teeth! Indicating of course that not only was Paul decapitated but his death were knocked out which would make dental identification impossible. 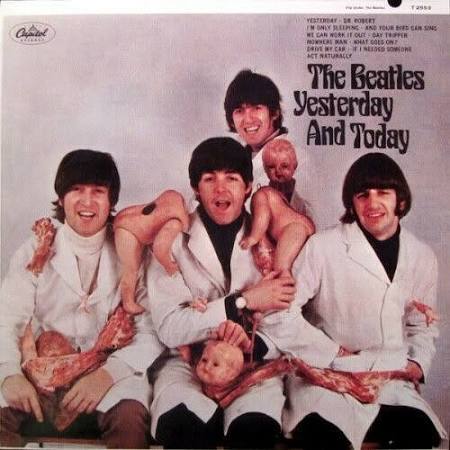 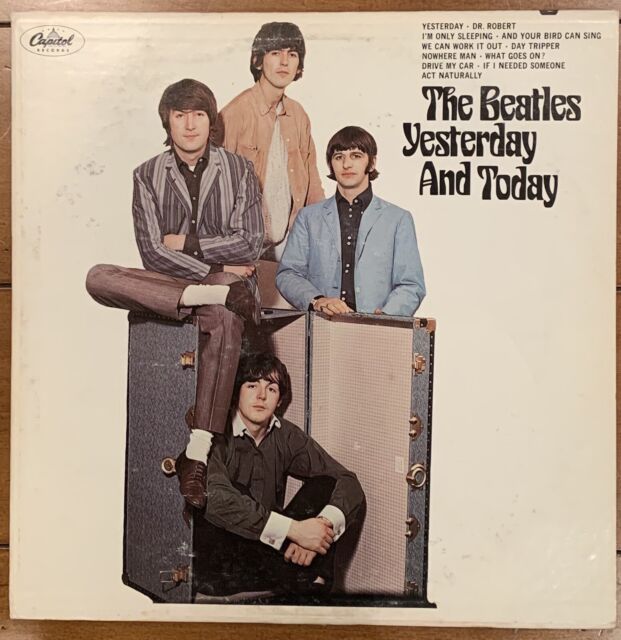 In songs on “Yesterday” supposed lyrical hints, in “Yesterday”- “Paul” sings “I’m not half the man I used to be.” of course he isn’t he’s dead. in “Dr. Robert” John sings “your a new and better man.’

Also in late 1966 The Beatles had originally planned on filming their 3rd movie- of course with the death of Paul McCartney not only no more touring but the making of the movie had to be cancelled because Billy Shears Campbell was not ready to appear before the camera.

On The Beatles Rubber Soul- song hints – from the song “In My Life”- ‘ some are dead and some are living”- some are dead? Stuart Sutcliffe their original bassist had died in April 1962 and now of course poor Paul. In “Girl”- “will she still believe it when he’s dead.”

On the Revolver album released in the summer of 1966- on the album cover- John, George and Ringo are facing forward- Paul sideways- Paul is different now he doesn’t belong.

In lyrics from the Revolver album- in Got To Get You Into My Life ” I was alone I took a ride”- of course Paul was alone and was going for a ride when the fatal accident happened. The song “She Said She Said” the lyrics “I know what it’s like to be dead.” In Eleanor Rigby- “Father McKenzie wiping the dirt from his hands as he walks from the grave.” and in the song “For No One”- “She says that long ago she knew someone but now he’s gone.”

Tomorrow Sgt. Pepper’s Lonely Hearts Club Band where The Beatles really amp it up in revealing the clues of Paul’s death.

8 responses to “HERE’S ANOTHER CLUE FOR YOU ALL: THE PAUL IS DEAD CLUES! PART 2 EARLY CLUES BEFORE SGT. PEPPER”