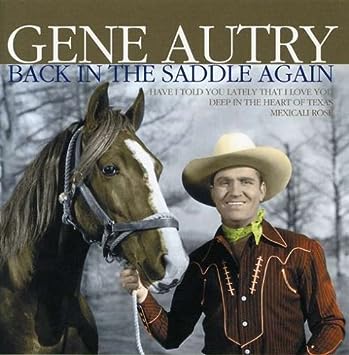 Three Chords And The Truth: Essential Country Music Songs: “Back In The Saddle Again”- Gene Autry.  “Back In The Saddle Again” was the signature song of The Singing Cowboy- Gene Autry.  The song was co-written by Autry and Ray Whitley for the movie Border G-Man- and was released in 1939. It was performed by Autry his movie Rovin’ Tumbleweeds in 1939. In 1997 the song was inducted into the Grammy Hall of Fame. The Western Writers Of America voted it 5th in their 100 greatest western songs list.

12 responses to “THREE CHORDS AND THE TRUTH: ESSENTIAL COUNTRY MUSIC SONGS:”BACK IN THE SADDLE AGAIN”-GENE AUTRY”