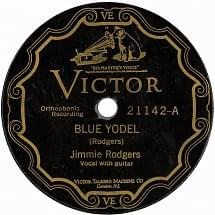 Three Chords and The Truth: Essential County Music Songs: “Blue Yodel [T-For Texas}- Jimmie Rodgers. Jimmie Rodgers in his short career would record a total of 13 songs he would call Blue Yodels. The first of the Blue Yodels- was recorded at Trinity Baptist Church in Camden, New Jersey in 1927. When it was released is a 78 in early 1928 it sold more than a half million copies which was incredible for that time. Gangster Rap has nothing on Jimmie Rodgers. Poor Thelma.