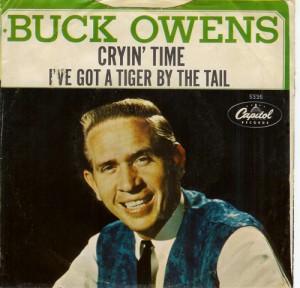 Three Chords And The Truth- Essential Country Songs: “I’ve Got A Tiger By The Tail”- Buck Owens and The Buckaroos  is the first song in this series because it is the first song I remember making an impression on me. I was four or five years old when I heard this on the radio and I thought the song was about a tiger. My father went out and bought the record and I played it over and over. All these years later I am still not tired of hearing it. Buck Owens was my favorite musical artist until I found The Beatles years later. The first three concerts I went to was to see Buck Owens at the Jamboree in Wheeling, WV. when I was 8 or 9. I was such a Buck Owens fan that I can’t recall my grandfather ever calling me by my name- I was always Buck.

“I’ve Got A Tiger By The Tail” was written by the great country music songwriter Harlan Howard and Buck Owens. {Harlan Howard is credited as the man who came up with the definition of country music being “Three Chords And The Truth.” }  Buck was originally inspired with a song idea from the Esso gas station slogan of the time “Put A tiger in your tank.” The song was recorded in late 1964 and released in December 1964 and became Buck Owens and The Buckaroos 6th #1 country song -and spent 5 weeks at the top of the country chart- and it also became the biggest hit Buck had on the Billboard Pop Chart peaking at #25.

5 responses to “THREE CHORDS AND THE TRUTH: ESSENTIAL COUNTRY MUSIC SONGS: “I’VE GOT A TIGER BY THE TAIL”- BUCK OWENS AND THE BUCKAROOS”