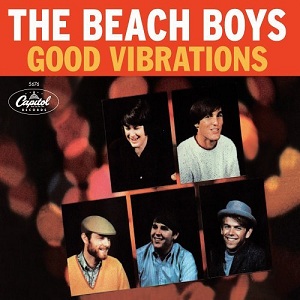 The Sounds Of Summer- Day 63 of 95- “Good Vibrations”- The Beach Boys. Got to run at least a couple more songs by The Beach Boys out here before the end of summer-which officially ends on September 23rd. “Good Vibrations” would be my nominee for the greatest Beach Boy single. The song was written by Brian Wilson and Mike Love and recorded in 1966- released in October of 1966. 1966 was Brian Wilson’s peak year for creativity- his masterpiece “Pet Sounds” also came out that year. The effort into making “Good Vibrations” consumed 90 hours of tape. The finished product is 3:35- it was dubbed by publicist Derek Taylor as a ‘pocket sympathy.’ It is certainly a pop music masterpiece. Mike Love and Carl Wilson share co-vocals on this single which went to #1 in both the US and UK.