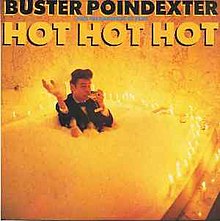 The Sounds of Summer- Day 31 of 95 -“Hot Hot Hot”- Buster Poindexter. As most of the nation is in the midst of a summer heat wave- this song came to mind. “Hot Hot Hot” was originally done in 1982 by  Arrow- written by Alphonsus Cassell who was Arrow. It was a minor hit in the UK. In 1987 the best known version of the song came along with David Johansen- formerly of The New York Dolls- as his lounge singer persona Buster Poindexter. The song got a lot of airplay on MTV – with Bill Murray in the music video. Years later Johansen would call “Hot Hot Hot “the bane of my existence.”  In the extended mix of the song Buster Poindexter says “Hot” 137 times. When I think of Johansen I must admit this song is the first thing I think of- not his superior work with the New York Dolls.  A great song for today though. Luckily here in eastern Ohio it will go from the 90’s today to a high of 73 tomorrow.