Every Entry Into The Billboard Hot 100 Singles Chart- 1969- Part 15. The final three entries int the Hot 100 for January- come from January 25th. No big hits here. I had only heard one of these songs before and that was just a week or so ago when I listened to Porter Wagoner’s album. 43. ” Hey! Baby”- Jose Feliciano. RCA Victor. Latin, Pop. Folk. Written by Bruce Channel and Margaret Cobb. B-side-My World Is Empty Without You.” The b-side also charted reaching #87 a few weeks later.  Jose Feliciano won the Grammy for Best New Artist in 1968. His two Top 40 hits came from 1968 with the big one being a cover of The Doors “Light My Fire”  #3 and “Hi-Heel Sneakers” #25. He also caused a stir when he sang The Star Spangled -Banner before Game 5 of the 1968 World Series- a great rendition which wasn’t done in the traditional way. It is my second favorite version of the Star Spangled- Banner behind Marvin Gaye’s NBA All-Star performance. A single was released of the World Series performance by Jose and it reached #50.  In all Jose Feliciano had 12 Hot 100 singles.  “Hey! Baby” is a cover of Bruce Channel’s #1 hit from 1962.”Hey! Baby” peaked at #71 and spent 5 weeks in the Hot 100. Grade: B-

44. “The Carrol County Accident”- Porter Wagoner. RCA Victor. Country. Written by Bob Ferguson. B-side- “Sorrow Overtakes The Wine” Porter Wagoner was a big country music star in the 60’s and 70’s and is best remembered for his television show which launched Dolly Parton into stardom. From 1954-83 Wagoner charted 83 singles into the country singles Top 100- but this would be the one and only single to make the Hot 100 pop chart. “The Carroll County Accident” peaked at #92 and spent 4 weeks in the Hot 100. Porter Wagnoner died in 2007 at 80. Grade: B 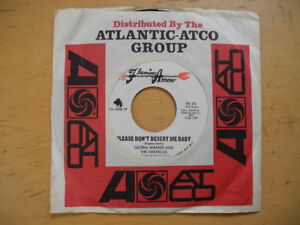 45. “Please Don’t Desert Me Baby”- Gloria Walker and The Chevelles. Flaming Arrow. Soul, R&B. Written by Eugene Davis. B-side -Need Of You . Gloria Walker placed two singles in the Hot 100- one in late 1968 called “Talking About My Baby”  that was credited just to Gloria Walker- which peaked at #60 and spent 7 weeks in the Hot 100 and then a right afterwards this one -Please Don’t Desert Me Baby” which is credited to Gloria Walker and The Chevelles- peaked at #98 and spent 2 weeks on the chart- and that was it. My Billboard Hot 100 Singles book provides a little biographical information on nearly everyone but nothing on Gloria Walker not even a DOB. I did a little searching on the internet but other than some info on her singles found nothing. Grade: C