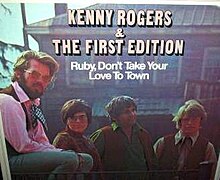 1969 Song of the Day is “Ruby, Don’t Take Your Love To Town” by Kenny Rogers and The First Edition. If I knew this- I had forgotten it- the song was written by Mel Tillis about a paralyzed veteran of a what has to be assumed the Vietnam War- although it is never said in the song. The song was first done by the great Waylon Jennings in 1966 and then was a #9 country hit for Johnny Darrell in 1967. In 1969 Kenny Rogers wanted to take his group The First Edition more into a country sound and they recorded “Ruby” on one take with Rogers singing lead. It was released as a single and went to #6 on the Billboard Hot 100 but only #39 on the country singles chart. Rogers and The First Edition would have a couple more hits before breaking up and then as we all know Rogers reinvented himself as a country singer-and went on to great success in the late 70’s-early 80’s. The video- Kenny Rogers before the gray hair and all the plastic surgeries. Never a fan but this isn’t a bad tune.  Neither is Kenny Rogers and The First Editions biggest hit from 1968- Just Dropped In To See What My Condition My Condition Was In- which went to #5.