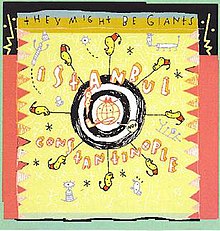 History In Music today- I thought after yesterday’s  “Strange Fruit” to go a little on the light side- a fun song performed by the quirky group They Might Be Giants-called “Istanbul {Not Constantinople.} The song was written by an Irish lyricist Jimmy Kennedy and the music by an American composer Nat Simon. The song was written on the 500th anniversary of the fall of Constantinople by the Ottomans. In 1930 Constantinople became Istanbul.  The original release was by The Four Lads in 1953 and went to #10 on the pop charts and became a gold record.

In 1990 the song fell into the hands of the alternative rock band They Might Be Giants- this version is a faster version of the song. The version by They Might Be Giants went to #61 on the UK charts but didn’t chart in the US. I heard it on the radio and it was an instant favorite of mine. Years later when I was in charge of the morning news at the school  where I was teaching I would play music in the mornings for the fifteen minutes before the news began and would play this song a couple times a month since a lot of the students would request it. 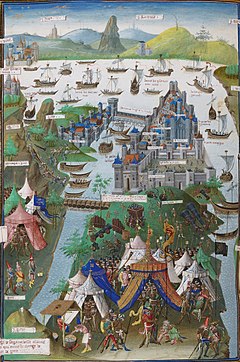 On May 29, 1453 Constantinople the capital of the Byzantine Empire fell to the invading Ottoman army led by 21 year old Sultan Mehmed II. The capital fell after a 53 day siege. The capture of the city and the defeat of Byzantine forces led by Emperor Constantine XI Palaiologos marked the end 1500 year Byzantine Empire. Many historians mark the Fall of Constantinople as the end of the Medieval period.