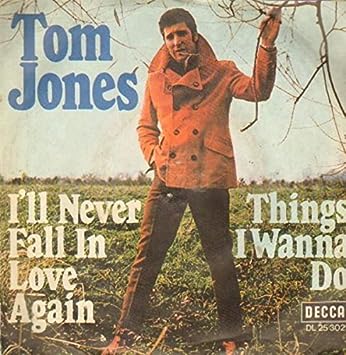 1969 Song of the day- “I’ll Never Fall In Love Again”- Tom Jones. This is not to be confused with the Burt Bacharach which was a hit in 1969 by Dionne Warwick. This “I’ll Never Fall In Love Again’ which went to #6 in 1969- was written and first performed by Lonnie Donegan the King of Skiffle who had a big influence on The Beatles- and  Jimmy Currie. Tom Jones originally released the single in 1967- it went to #2 in the UK but failed to crack the Billboard Top 40 in the US- peaking at #49. The re-release of the single by Jones- would be #8 on the year end Billboard Hot 100.  The song would later be covered by Elvis Presley on his 1976 album-From Elvis Presley Boulevard, Memphis, Tennessee.

Tom Jones had this to say about how he came about recording this song “I did some shows with Lonnie and we became friends…. One night he said: ‘Look, I have this song, you’d sing the pants off it. I’ve recorded it, but I can’t really sing it. It’s a sort of a rewrite of a song from the Thirties when the Depression was going on, called ‘I’m Never Going To Cease My Wandering.’ I knew that song, because a lot of guys used to sing it in pubs in Wales. I went to his house in Virginia Water, and he got this record out to listen to…. With the big chorus on it, it sounded fantastic. He was singing it Lonnie Donegan style, completely different from the way I did, like somebody busking…”