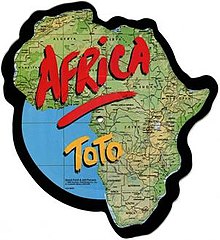 Songs I like by Artists I Don’t- “Africa”- Toto.  I never had any use for Toto back in the late 70’s-early 80’s when they landed ten singles onto the Top 40- with Hold The Line #5, Rosanna #2, Africa #1 and I Won’t Hold You Back #10- all reaching the Top 10. Over the years though since I have developed a liking of their song “Africa”- a soft rock/ jazz fusion song written by band members  David Paich and Jeff Porcaro. Paich has said about writing how he came up with the idea of writing the song-” At the beginning of the ’80s I watched a late night documentary on TV about all the terrible death and suffering of the people in Africa. It both moved and appalled me, and the pictures just wouldn’t leave my head. I tried to imagine how I’d feel about if I was there and what I’d do.”   This is the one Toto song that has had legs- it went to #1 back in 1982 but seems as popular today as ever. Last year Weezer covered it- drawing attention to it again. I love the original and Weezer’s exact cover which peaked at #51 on the Hot 100.