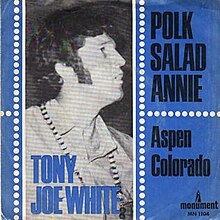 1969 Song of the Day is “Polk Salad Annie” by Tony Joe White. Written by Tony Joe White and produced by Billy Swan [ who is best known for the 1972 hit ‘I Can Help.”]  Polk Salad Annie would peak as a single at #8 on the US Billboard Hot 100. White would go on to have a long career in music but Polk Salad Annie- would be his only Top 40 hit and the album it came off of- Black And White- released in 1968 would be his highest charting album. He would be active in music until his death last October from a heart attack at the age of 75.

Polk Salad Annie grew up in the rural south and the song draws from his experiences growing up. The song describes the life of a poor girl rural girl and her family in the south. Musically White grew up listening to the blues, country music and Cajun music and White was influenced by that upbringing- his music could best be described as swamp rock.  Polk Salad Annie- was released as a single in January 1969 and it had a slow agonizing rise- it took 9 months to become a hit. The record company had written it off when people a DJ in Los Angeles broke the record.  Elvis would record Polk Salad Annie in 1970 and it would become a #2 single in the UK for him and a staple in his early 70’s concerts.

White’s comments in a 2014 interview on how he came to write Polk Salad Annie-and the song he wrote that was a big hit for Brook Benton “Rainy Night In Georgia. “I heard “Ode to Billie Joe” on the radio and I thought, man, how real, because I am Billie Joe, I know that life. I’ve been in the cotton fields. So I thought if I ever tried to write, I’m going to write about something I know about. At that time I was doing a lot of Elvis and John Lee Hooker onstage with my drummer. No original songs and I hadn’t really thought about it. But after I heard Bobbie Gentry I sat down and thought … well I know about polk because I had ate a bunch of it and I knew about rainy nights because I spent a lot of rainy nights in Marietta, Georgia. So I was real lucky with my first tries to write something that was not only real and hit pretty close to the bone, but lasted that long. So it was kind of a guide for me then on through life to always try to write what I know about.