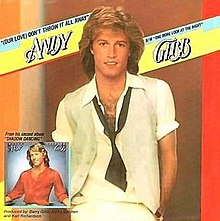 Songs I Like by Artists I Don’t-{Our Love}  Don’t Throw It All Away- Andy Gibb. It must be nice to have talented older brothers- and not to take anything away from brothers Robin and Maurice- but this for the most part was the work of Barry the most talented songwriter of the family. In the late 70’s while The Bee Gees had reemerged to heights they could only have dreamed about- the pen of Barry Gibb seemed to extend to help other less talented artists score hits-and some established stars also benefited. To name a few- Samantha Sang- Emotion, Yvonne Elliman “If I Can’t Have You”, Frankie Valli “Grease”, Kenny Rogers and Dolly Parton “Islands In The Stream”, Dionne Warwick ‘Heartbreaker”, “Chain Reaction’ Diana Ross among others. As a songwriter Gibb has had #1 hits in 5 decades from the 1960’s to 2000’s.  Which gets us younger brother Andy. Andy was only 19 when he had his first #1 hit in 1977 with I Just Want To Be Your Everything. His first three singles all went to #1- Love Is Thicker Than Water and Shadow Dancing. In his short career he had 9 Top 40 hits- all written or co-written by brother Barry. I don’t know if we would have heard of Andy Gibb if it wasn’t for his brothers. When you heard his singles you knew that Bee Gee sound from the start. He was being sold as another teen idol but he was a teen idol that had good material to sing [ at least the singles I have never listened to any of this three albums } I never thought to much of Andy Gibb back then- he was kind of a Lief Garrett/ Shawn Cassidy on steroids would have been my assessment- then I heard {Our Love} Don’t Throw It All Away} my first reaction was this is a great song- but it’s Andy Gibb I can’t like this-it’s by Andy Gibb. But the song won out- in my opinion [ and I also later read a quote by Randy Newman that made me feel like it was OK to love this song- Randy did too}

Andy Gibb’s demise is well known- drugs and alcohol and a broken heart. He was dead just days after his 30th birthday. I always thought it sad that the Gibb’s mother Barbara who lived until 2016- dying at 95- lived to see three of her four sons die far too young. There is a 5th Gibb- a sister Lesley.