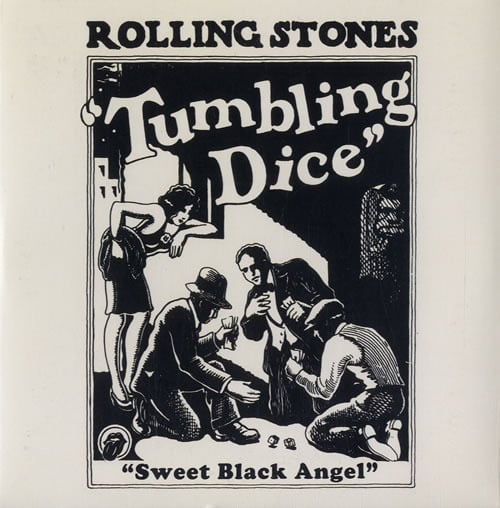 The Rolling Stones Song of the Day is- Tumbling Dice. Tumbling Dice is the last song on side 1 of The Rolling Stones double album “Exile On Main St.”- it was written by Mick Jagger and Keith Richards. One of my favorite songs ever by The Rolling Stones- it was the big hit off of this album- it went to #7 on the Billboard Hot 100 in the US and to #5 in the UK singles chart. The b-side is “Sweet Black Angel.” An early version of this song was worked on during the Sticky Fingers sessions in 1970- the original title was Good Time Woman. A big difference in the original and what they came up with in the end- is the original lacked a guitar riff. Tumbling Dice was recorded in the French chateau that Keith Richards had rented in the summer of 1971. Bill Wyman wasn’t in attendance when the song was recorded- Mick Taylor plays the bass and Mick Jagger played guitar. Rolling Stone Magazine ranks “Tumbling Dice” at #424 on their Greatest Songs Ever list. Linda Ronstadt would cover the song in the late 70s- her single version went to #32. There was controversy in- not the Stones original but in Ronstadt’s remake- she changed the lyrics a bit- she changed The Stones opening of- “Women think I’m tasty but they’re always tryin’ to waste me.” to People try to rape me. Always think I’m crazy.”  Then of course it gets twisted around  years later- in 2001 before Congress Hilary Rosen representing the record association listed Tumbling Dice as a song that would be in danger of censorship- ‘a song about rape written by Mick Jagger and Keith Richards.”