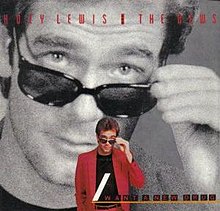 Songs I like- by artists I don’t- the other day I heard a song [ which I will feature soon} that I really like but it was by an artist that I really have no use for. I’ve always thought that its possible that any artist no matter how bad- may have it in them to put out at least one gem. You just never know. If an artist I don’t care for comes up with something I like- I am willing to admit to it. I saw Huey Lewis and The News once in concert- somewhere around 1990- the girl I was dating at the time wanted to go- it wasn’t a bad concert- it wasn’t a great one either- another girlfriend a few years earlier had me going to see Whitesnake now that was pretty bad.

In the past I have referred to Huey Lewis and The News as being pedestrian – I can’t say I dislike Huey and The News- they are just there- inoffensive. But I did like from the first time I heard it the second single off of this famously huge selling Sports album from 1983- I Want A New Drug. The single went to #6 on the Billboard chart. There were 5 Top 20 hits off of Sports- and 4 of those made the Top 10. Huey wrote the song in just a couple minutes and says it is a love song- that it isn’t pro or anti-drugs. It is a catch song and the greatest song Huey ever did in my opinion. Huey would sue Ray Parker Jr for stealing the melody from I Want A New Drug- for the Ghostbusters theme- they settled out of court. Weird Al parodied I Want A New Drug- with I Want A New Duck. I Want A New Drug- a song where Huey Lewis got off of the sidewalk.