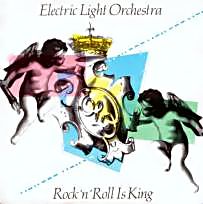 Hans Worst Hits of the 80’s- “Rock ‘N’ Roll Is King” by Electric Light Orchestra. ELO was great in the 70’s- they had a long run of hit singles that were all fantastic- stuff like Can’t Get It Out Of My Head, Evil Woman, Strange Magic, Livin’ Thing, Do Ya, Telephone Line, Turn To Stone, Mr. Blue Sky, Sweet Talkin’ Woman -but as the decade turned they began to slip. Doing a song with Olivia Neutron Bomb- Xanadu was a bad move. Hold On Tight another hit wasn’t any good and then along came our pick for today- Rock N Roll Is King. Rock N Roll Is King was on their Secret Messages album-and like their other 1980s hits it just doesn’t have that ELO feel about it- maybe the group had just run its course. They would have one more hit- another forgettable song- Calling America and that was pretty much it. I see they are back on tour this year- I don’t know how many original members- the group membership over time had changed- but ELO is really Jeff Lynne so as long as he is there… Rock N Roll is King peaked at #19 in the US in 1983.