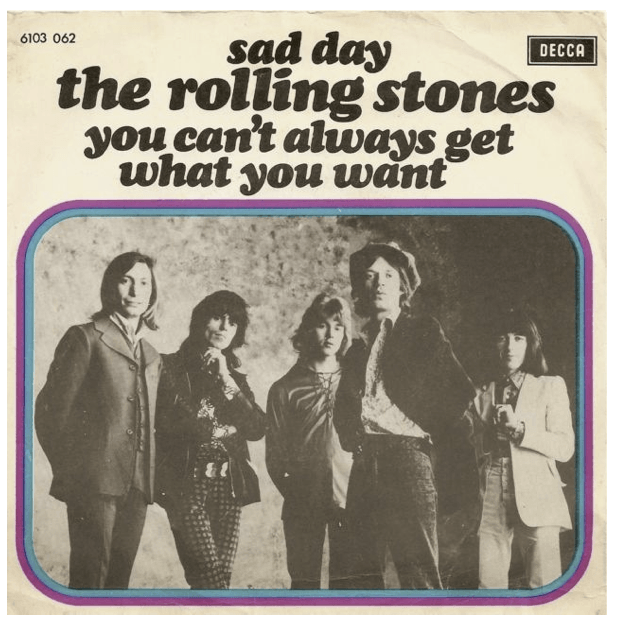 The Rolling Stones Song of the Day is- “You Can’t Always Get What You Want”- the song was written by Mick Jagger and Keith Richards and is the closing song on The Rolling Stones Let It Bleed album. One of the most famous Stones songs- it is a head shaker to realize that as a single it didn’t even make the Top 40 in the US peaking at #42. Rolling Stone Magazine would rank it #100 on their 500 Greatest Songs Ever list.

You Can’t Always Get What You Want is the album closer but it was the first song that The Stones recorded for Let It Bleed. There are two versions of the song- the album version which is over 7 minutes in length and the 5 minute version that was released as a single. Only three members of the group would play on this song- Mick, Keith and Bill Wyman- other outside musicians appear -including session super star Al Kooper who plays piano, organ and french horn. The London Bach Choir is featured arranged by Jack Nitzsche.

I really like critic Richie Unterberger’s take on You Can’t Always Get What You Want- and his comparison of it with The Beatles “Hey Jude– from Allmusic.

If you buy John Lennon’s observation that the Rolling Stones were apt to copy the Beatles’ innovations within a few months or so, “You Can’t Always Get What You Want” is the Rolling Stones’ counterpart to “Hey Jude.” Both songs last about seven minutes, an almost unheard of length for a pop tune used on a single (although “You Can’t Always Get What You Want” was just a B-side, to “Honky Tonk Women”). Both songs swell from simple beginnings to orchestral crescendos; both use choral backing vocals; and both have very long, gradual fadeouts that repeat a key musical motif of the composition. “You Can’t Always Get What You Want” is not a mere “Hey Jude” imitation, however, being quite worthy, even classic, in its own right. The real shock was the opening verse, sung unaccompanied by the London Bach Choir — it sounds like a straight classical recording, not a rock one, let alone a Rolling Stones one. The classical mood is continued by the stately piano and brief, sad French horn solo (played by Al Kooper) on the following instrumental section. Mick Jagger sings the first verse without drums; up to this point, the song is a ballad. When he gets to the end of the chorus, though, the piano becomes more forceful, the drums and backing voices kick in, an organ comes along, and the song changes into a mid-tempo rock number. As 1960s Rolling Stones originals go, there’s not much, not any really, blues involved. It’s a classy pop tune, actually, with some folk (especially in the guitar strum), gospel (especially in the singalong chorus vocals), and classical elements. It sounds inspirational, despite the somewhat downcast subject matter; and had it been released as an A-side, it would have stood a chance of being a substantial hit. Much has been made of the lyrics reflecting the end of the overlong party that was the 1960s, as a snapshot of Swinging London burning out. That’s a valid interpretation, but it should also be pointed out that there’s also an uplifting and reassuring quality to the melody and performance. This is particularly true of the key lyrical hook, when we are reminded that we can’t always get what we want, but we’ll get what we need. It’s a philosophical rumination, such as the one the Beatles offered around the same time (in “The End”) about the love you make being equal to the love you take, that’s simple but enduring. As with “Hey Jude,” “You Can’t Always Get What You Want”‘s endless fade manages to be hypnotic rather than boring, as the London Bach Choir reenters and the organ improvises nicely, adding an appropriate varnish of grandeur to a great song and performance.