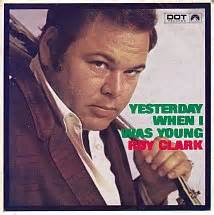 1969 Song of the Day- “Yesterday When I Was Young”- Roy Clark. Yesterday I did an entry on the retirement of baseball great Mickey Mantle who had retired 50 years ago. Thinking about The Mick made me think about this song. Mantle once said it was his favorite song and he had asked Clark to sing it at his funeral- a request that Clark honored. Mantle related to the song because it reminded him of his life- how he wasted so much time in his life. The song was originally written by the French singer-songwriter Charles Aznavour as “Hier Encore” [ or Only Yesterday}  Roy Clark covered it in 1969 and had a crossover hit with it- as “Yesterday When I Was Young.” {Note- both Aznavour and Clark died last fall- Aznavour in October and Clark in November.} the single peaked at #9 on the country singles chart and #19 on the Billboard Hot 100 pop chart. It was Clark’s only Top 40 pop hit. I’ve always liked this song- even though it is an incredibly sad song. I have always thought it was a pity that Roy Clark is best remembered as a co-host on the cornpone show Hee-Haw- he was a very talented musician as a guitarist, banjo and fiddle player. As a youth he lived for a year in my hometown.