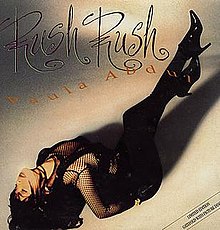 Hans Worst Hits of the 90’s- “Rush Rush” by Paula Abdul. Paula Abdul was made for MTV. Without music videos we would have never heard of her. As a singer she was photogenic, a good dancer  a noted choreographer and attractive. As a Laker girl she was discovered by The Jacksons. One more reason to dislike the Lakers and The Jacksons. As a singer she isn’t Aretha Franklin- her big problem is she couldn’t sing- not that the masses seemed to care at least for a brief period of time- she scored six straight #1 singles- including four #1’s off of her debut album which had never been done before on a debut. What a haul of trash to go through in picking out just one Straight Up, Forever Your Girl,  Cold Heated and Opposites Attract were the four from the debut, on her second album Spellbound- she scored 2 more #1′-Rush Rush and The Promise Of A New Day by 1995 and the third album the public was no longer spellbound- she had a minor hit My Love Is For Real #28 and that was that- she hasn’t made an album in the 24 years since. What to select as the Worst Paula Abdul hit? Throwing a dart at the board- let’s go with Rush Rush.