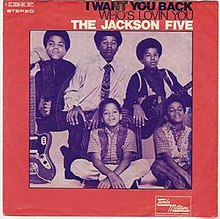 1969 Song of the Day-“I Want You Back”- The Jackson 5. The first hit single from Gary, Indiana’s Jackson brothers- Michael, Tito, Jackie, Jermaine and Marlon. It was clear early on that the real talent in the group and the family was the 8th born out of 10 in the family- Michael. Michael sang the lead vocals on I Want You Back- he had just turned 11. I Want You Back was written by The Corporation- the Motown songwriters and arrangers formed in 1969 by Motown head Berry Gordy.  The song was first considered for Gladys Knight and then for Diana Ross.  They have always given Diana Ross the credit for discovering the Jackson 5 but it was Gladys Knight who first mentioned them to Berry Gordy.

I Want You Back was released as a single on October 7, 1969 and was given a big boost by television appearances by the Jackson 5 on Diana Ross’s The Hollywood Palace- and by appearing on Ed Sullivan Show in mid-December. The single went to #1 on the Billboard Hot 100 and Soul singles charts- it didn’t reach #1 on the Hot 100 until January 1970.

There has always been some controversy over who played the famous bass line on this single. Motown had moved to Los Angeles [ a mistake] and the members of the great Motown back up band The Funk Brothers had changed. The great James Jamerson played on most of the songs from 1962-68 but by the time this was recorded he had grown unreliable. It is believed by most that Wilton Fender was the bassist who played the memorable basslines.

I Want You Back has been one of the most sampled songs over the years- well over 60 different recordings have sampled it. It was the Jackson 5’s first hit- and their greatest hit.  Rolling Stone Magazine ranked it at #121 on their 500 Greatest Songs Ever list.