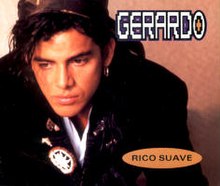 Hans Worst Hits of the 90’s- Rico Suave- by Gerardo. The less said about this probably the better. Gerardo- was an Ecuadorian singer-rapper who referred to himself as the Latin Elvis, The Latin Frank Sinatra- not even close buddy. This song which went to #7 in 1991- was written by four people- it took four people to write this? Produced by Michael “Flashdance” Sambello. The song samples a James Brown song- Give It Up Or Turn It Loose” and a Venezuelan group named Daiquiri. Gerardo had one other hit on the Billboard charts- We Want The Funk #16 and that was it. The story does have a strange turn though- the rap- singing career died out and Gerardo must not be as stupid as he seemed- he became an A&R executive at Interscope records and had some success- he was given credit [or blame] for bringing Enrique Iglesias to the record label’s attention and signing rapper Bubba Sparxx. He is now a pastor in Ashland, Kentucky. His daughter was Miss California USA 2016 Nadia Mejia. Gerardo is now 53. Glad to see he found success- singing wasn’t a strong point.