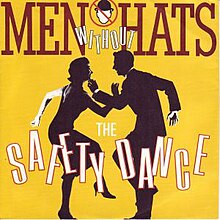 Hans Worst Hits of the 80’s- The Safety Dance by Men Without Hats. A number of years ago I asked a friend of mine who is a big music listener [but tends to like somewhat bad music- in my music snob opinion}- what his favorite song ever was- and he answered immediately “The Safety Dance” by Men Without Hats. What!?? I laughed out loud on that and then he felt he had to defend his choice. How do you really defend that though? This is an awful song- by a crappy group. This song was written by Men Without Talent- I mean Hats- front man Ivan Doroschuk after he got kicked out of a club for pogo dancing. The song was written as a protest song against bouncers throwing out pogo dancers from new wave clubs. Some people thought the song was a call for ‘safe sex.” Some thought it was an anti-nuclear song.  I thought it was a call to change the radio dial. The song was a slow climber- it took a couple of months in 1983 for the song to reach the charts- but it did- and eventually went to #3 on the Billboard Hot 100. Men Without Hats- a Canadian import- had one other American hit Pop Goes The World- #20 in 1987- which is better than The Safety Dance- but hardly a classic.