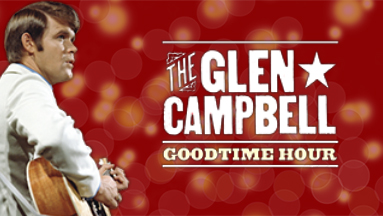 It was fifty years ago today- Wednesday January 29, 1969- The Glen Campbell Goodtime Hour premiered on CBS-TV. It is easy to forget how popular Glen Campbell was in the late 60’s and early 70’s. He was winning Grammy Awards and being nominated left and right for songs like Gentle On My Mind and By The Time I Get To Phoenix and Wichita Lineman [one of my favorite songs ever.} He was having big country hits that had crossover appeal. So he got his own show and it was successful- it lasted from January 1969 until June 1972. The show was a music and comedy variety show- and it was also one of the few shows to survive the CBS purge of rural oriented shows in 1971. The thing I remember most about the show is the opening- where Campbell would be in the crowd and would stand up with his guitar singing “Gentle On My Mind.” There are actually full episodes you can watch on youtube- I will just attach an opening to his Christmas Show in 1969.

5 responses to “IT WAS FIFTY YEARS AGO TODAY- WEDNESDAY JANUARY 29, 1969- THE GLEN CAMPBELL GOODTIME HOUR- PREMIERS ON CBS-TV”