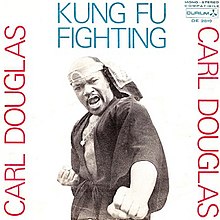 Han’s Worst Hits of the 70’s sticks with the year 1974 today with Kung Fu Fighting- by Carl Douglas. Why are so many one-hit wonders so bad? OK obviously millions of people loved this song- the single sold 11 million copies worldwide and was #1 in the US, UK, Australia, France, Belgium- you get it- #1 about everywhere. The song came out in 1974 with good timing- capitalizing on the martial arts movie craze and there was the martial arts western series starring David Carradine that was on television in the US at the time- Kung Fu.

Kung Fu Fighting was written by Carl Douglas, a Jamaican vocalist. Douglas with Kung Fu Fighting became the first Jamaican born singer to have a #1 hit single in the US.  The song was originally meant to be a b-side. They had a song called I Want To Give You My Everything that was going to be the single. After recording it they spend 10 minutes coming up with something to put on the b-side and -well Kung Fu Fighting was what they came up with. It was recorded in two takes because they were limited in the time they had in the studio. Douglas got the idea for the song after seeing two kids in London doing Kung Fu moves. You would have to guess back in 1974 when the follow up to this song was called “Dance The Kung Fu” which peaked at #48- that Carl Douglas was out of ideas.

In 1998 the group Bus Stop went to #8 in the UK with their rendition of the song- sampling Carl Douglas.