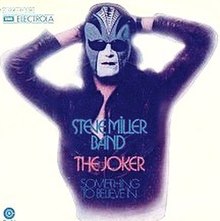 Han’s Worst Hits of the 70’s today- is a staple of classic rock radio- The Joker- by the Steve Miller Band. I know I know this song is a classic. Turn your radio on a ‘classic rock’ station today for a few hours and you are bound to hear this song. That is exactly why consider it one of the worst hits of the 70’s- I can’t think of a more overplayed song. I wasn’t irritated or annoyed by the song back in the 70’s I can’t say that I liked it very much but over time this song has become to me extremely annoying to hear repeated over and over. It should be banned from the radio for at least 5 years. I have no doubt if I would turn on the local so called great- Classic Rock station- and listened to it all day that at some point in the day I’d hear this song. Note- Steve Miller uses the word pompatus in two songs-including this one. And as long as I am Steve Miller bashing- I can’t stand Take The Money And Run another overplayed song. Meanwhile they could play Living In The USA anytime they want but it’s not in the classic rock heavy rotation.