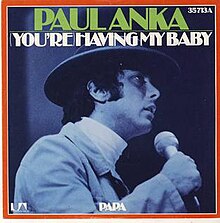 Yesterday I started this series off with One Bad Apple by The Osmonds- well I must admit I would rather be forced to listen to One Bad Apple over and over again for hours than to have to listen to “{You’re }Having My Baby” by Paul Anka and his duet with Odia Coates just once. This song is nauseating.  Over the years I will get in discussions with friends on music and will throw out- “What is the worst song ever.” It usually doesn’t take long for this to get mentioned. How did this become such a big hit? Had to be payola. In fact in 2006 CNN had a poll and You’re Having My Baby was voted the worst song ever. It was a #1 song in the summer of  1974.

The song was highly controversial- Anka wrote- sang “You’re Having My Baby”- not our baby or the couples baby. The National Organization for Women gave him the Keep Her In Her Place Award and Ms. Magazine- gave him the Male Chauvinist Pig of the Year Award. Anka tried to explain himself out of the situation to no avail. Anka is from Canada I would have supported deportation just on You’re Having My Baby.

Paul Anka wrote this song- and oddly enough the producer- Rick Hall- also produced One Bad Apple. Rick Hall also worked with some greats- Otis Redding, Aretha Franklin, Duane Allman  and Etta James- so I guess the good outweighs the bad. Hall passed away this January at the age of 85. The Father of Muscle Shoals Music. It’s a head shaker on how he ever got in the same room as The Osmonds or Anka. Anka a poor mans Neil Sedaka.

Paul Anka of course may be most famous for writing My Way for Sinatra. A song that Frank quickly grew to hate.

The Circle Jerks included the song on their Jerks On 45 single [attached below} which is really good stuff!