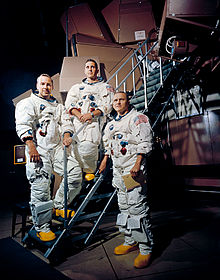 Back in  late May 1961 President Kennedy announced the goal for the United States to send a man safely to the moon and bring him back- before the end of the decade. Just weeks before Alan Shepard had become the first American in space. It seemed like a lofty goal when considering Shepard’s flight lasted but 15 minutes. Quinn Maddux and I have talked at length about this over the years on this question- had JFK not been assassinated would we have made it to the moon and back by the end of the decade? We both think probably unlikely- JFK’s death in a way put an urgency into the mission- helped to focus everyone involved. Let’s get this done by the end of the decade. There were set backs-the February 1967 fire in the cabin that killed the test crew being the major one. From November 1966 until October 1968 no astronauts went into space. After the fire manned flights were suspended while they investigated the fire and it’s causes and made the necessarily safety improvements.

In October 1968 the crew of Apollo 7 went up and on this date in 1968 a big announcement- Apollo 8 would be launched in late December -a six day mission where the three astronauts would be the first persons ever to orbit the moon. The race was back on to complete JFK’s goal by the end of the 1960’s. Of course another goal and this was an important one- to beat those rotten Communists  the Soviet Union to the moon. Being second to the moon didn’t have much appeal.

4 responses to “IT WAS FIFTY YEARS AGO TODAY- NOVEMBER 12, 1968–NASA ANNOUNCES APOLLO 8 MISSION IN DECEMBER- WILL BE FIRST MISSION TO ORBIT THE MOON”