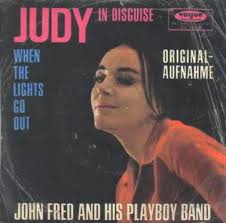 The second #1 song of 1968 on the Billboard Hot 100 was Judy In Disguise [With Glasses} by John Fred and His Playboys. The song was a play on The Beatles “Lucy In The Sky With Diamonds” from 1967’s Sgt. Pepper’s Lonely Hearts Club Band.”  When John Fred first heard Lucy In The Sky With Diamonds he thought they were singing “Lucy in disguise with diamonds.”  The song was written by John Fred and bandmate Andrew Bernard. I would consider it a novelty song and it’s a single I never particularly cared for.

John Fred had formed The Playboys in Louisiana in 1956. The band surely paid their dues over the years and Judy In Disguise {With Glasses} would make John Fred and His Playboy Band one of those notable “One Hit Wonders.” They would never have a Top 40 hit again. John Fred died in 2005 at the age of 63.