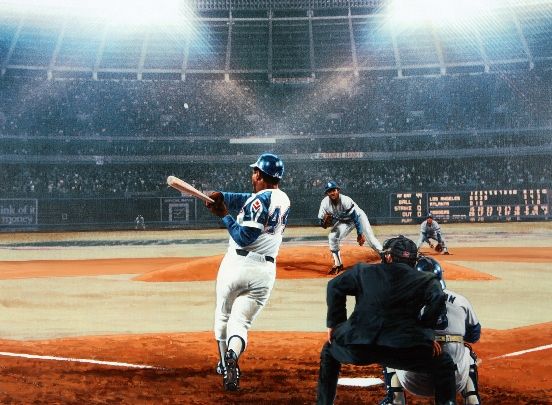 The top half now of the Baseball Top 40. In #40 to #21 there were probably 50 songs I could have placed in those 20 slots- the Top 20- gets tougher to position because the songs have been longtime favorites.

#20 LOVE IS LIKE A BASEBALL GAME- THE INTRUDERS  1968.  This single hit the charts #26 on the Top 40 and #4 on the R&B chart in 1968. The Intruders were one of the first groups to work with Kenny Gamble and Leon Huff and form the Philadelphia soul sound.

#19 THE PHILADELPHIA FILLIES- DEL REEVES 1971:  A #9 country hit for Franklin Delano Reeves in 1971. The baseball Phillies were pretty awful in the early 1970’s except for Steve Carlton who won an amazing 27 games that year on a team that went 59-97. It was a strike year and the Phillies were six games shy of playing the normal 162. Del sounds a little like Johnny Cash on this song. Years later Del would be instrumental in the signing of Billy Ray Cyrus. We shouldn’t hold that against him.

#18 MOVE OVER BABE [HERE COMES HENRY]- BILL SLAYBACK- 1973 Bill Slayback was a journeyman pitcher for the Detroit Tigers and a multi-talented man- he sang, played a number of musical instruments, painted, sketched and made furnature.  The legendary Tigers play by play man Ernie Harwell and Slayback wrote this song in 1973 as Henry Aaron was approaching the most sacred record in American sports- The Babe’s 714 home runs. It was a Monday night early in the season- the game was on national television. Bad Henry was tied with The Babe at 714. I couldn’t wait to get through the school day and for the game to come on that night. For some reason I just knew that Henry was going to do it that night with the eyes of the nation upon him and in his second at bat of the evening he knocked one over the left field fence for #715. What a great moment- not only for baseball but for America. I can’t imagine the pressure Aaron was under. He was getting death threats. He had ended 1973 with 713 home runs all winter the anticipation was growing. After he hit it-and they stopped the game for a little celebration- even I could tell at age 13 that the look on Henry’s face was one of relief. It was finally over. Bad Henry was one of the most consistent baseball players ever. He wasn’t flashy or spectacular like a Willie Mays. He didn’t hit tape measure home runs like a Willie Stargell, Mickey Mantle or Dick Allen. His home runs cleared the fence- and they counted just like any other home run. He was a quiet superstar who came and played every day and gave 100% effort. The best description I have read or heard about him in comparison to Willie Mays is- if you went to a game and saw Mays- all it would take is one game- and you’d see why he was so special. You could easily see it. For Aaron if he was coming to town to play your team in a three game series and you saw each game at the end of the three games you’d realize his greatness by the damage he left behind. It is hard to pick Aaron’s best season because most of them were pretty much the same- same numbers year in and year out.

#17 MY OH MY -MACKLEMORE AND RYAN LEWIS 2011. When I started going over songs for this list- I not only listened to the baseball song albums I have but ones I could find on the internet. I wasn’t aware of this song until I did some research and this one is the highest of those songs on my list. About the Seattle Mariners, Seattle and a tribute to the longtime Mariners play-by-play man Dave Niehaus “My Oh My” was one of his catchphrases. Love this song. If I would redo the list in the future it might rank even higher. When I was growing up in the Pittsburgh area- the Pirates legendary play by play man Bob Prince was to me as much a part of the Pirates as Clemente, Stargell or Mazeroski. I wonder if there are many of these guys left? Vin Scully sure was. So was Dave Niehaus.

#16 GLORY DAYS- BRUCE SPRINGSTEEN 1984: One of the biggest names on the countdown- this hit single #5 from the Born In The USA album is one of the most famous of all baseball songs and the biggest hit in the Baseball Top 40. The first verse was inspired by Springsteen running into an old Little League teammate. Doc Gooden who was on top of the baseball world in the mid 1980s when the song came out appears in the video striking out a couple hitters.