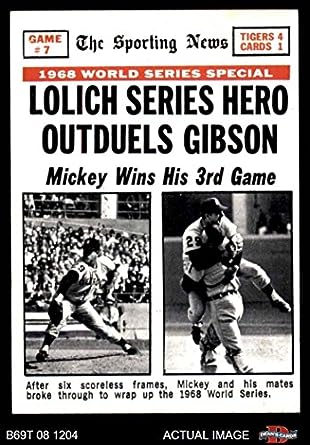 It was fifty years ago today- October 10, 1968- the Detroit Tigers beat the St. Louis Cardinals in the decisive Game 7 by the score of 4-1. It was a pitchers duel through six innings- no score as the Cardinals Bob Gibson and the Tigers Mickey Lolich were flawless. Gibson at that point had given up 1 run in 24 innings in this World Series. The key play of the game and the series happened in the Top of the 7th with 2 on and 2 out. Tiger Jim Northrup hit a fly ball to deep center field that Cardinal centerfielder Curt Flood misplayed [ Flood was probably the best defensive center field in baseball} the possible third out opened the doors- 2 runs scored on that play and then Bill Freehan doubled Northrup in giving the Tigers a 3-0 lead at the seventh inning stretch. In the top of the 9th light hitting Don Wert singled home pinch runner Dick Tracewski to give the Tigers a 4-0 lead. In their final at bats the Cardinals scored in the 9th with a Mike Shannon solo home run. Tim McCarver popped out to the catcher ending the series.

The Tigers had been down 3 games to 1. Only the 1925 Pirates had previously accomplished this feat.  Going into the series big things were expected of 31 game winner Denny McLain but the Tiger hero was their second best pitcher during the regular season- Mickey Lolich who won 3 of the 4 games. In Game 7-he pitched a complete game 5 hitter giving up only the Shannon home run in the bottom of the 9th.

A key decision and a gutsy one by Tiger manager Mayo Smith during the series was to move center fielder Mickey Stanley in to play shortstop in place of the light hitting Ray Oyler. Smith’s decision worked out ok- Stanley did make two errors at shortstop but they didn’t effect the outcome of any of the games. The Tigers offense was led during the series by their 3-4 and 5 hitters- veteran Al Kaline, Norm Cash and Willie Horton who all hit over .300 in the series. It was a tough loss for the Cardinals who were looking for their 3rd World Series in 5 years. The Tigers won three of their four games at Busch Stadium in St. Louis. I remember it as a series of memorable moments- but most of the games were not that close.

The World Series Championship was the 3rd in Tigers history- and their first since 1945 which was a war year and although it certainly counts- most of baseball’s best players were not playing that year. Since 1968 the Tigers have won one more- in 1984.

On a personal note it was the first World Series I saw from start to finish-all the games. In the days when weekday games were played in the afternoon- this 7 year old just happened to be ‘sick’ for a week. It was well worth it. I didn’t pull that act the next season I think my mom had caught on.

Over that winter my family almost moved from the Pittsburgh area to Detroit. I was all for the move. My dad had been laid off his job- and he had an uncle who ran a business in the Detroit area. There was a job there for him. My parents thought long and hard about it but decided to stay put. Great decision in may ways. I was all for it because the Tigers were great- they had won the Series- I’d have a great team to root for. Luckily we stayed and I didn’t miss out on the 1970’s Steelers [ the Lions still haven’t been to a Super Bowl let along win one} and the Pirates in the 70’s were excellent -winning World Series in 1971 and 1979.

28 responses to “IT WAS FIFTY YEARS AGO TODAY- OCTOBER 10, 1968 THE DETROIT TIGERS WIN THE WORLD SERIES”