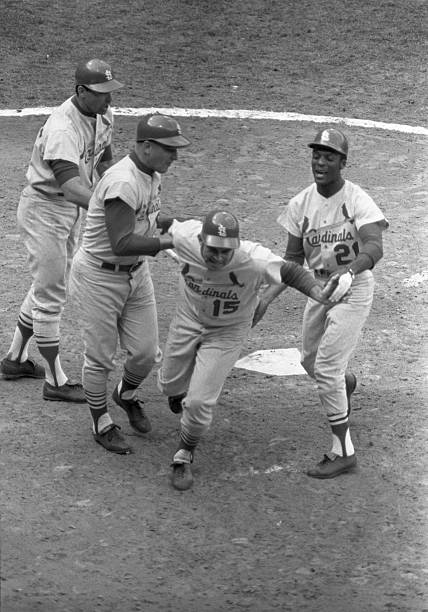 It was fifty years ago today- Saturday October 5, 1968- The World Series shifts to Detroit where games 3, 4 and 5 will be played. The underdog Tigers got on the board first in the 3rd inning when the Tigers veteran star Al Kaline hit a two run home run off of Cardinals starting pitcher Ray Washburn. The Cardinals answered in the Top 0f the 5th when Lou Brock singled, stole second and scored on Curt Flood’s double. Roger Maris walked. At that point Tiger manager Mayo Smith replaced starter Earl Wilson and brought in Pat Dobson to pitch.  Dobson got Orlando Cepeda to pop up to the catcher but then Cardinals catcher Tim McCarver hit a 3 run home run to right field off to give the Cardinals a 4-2 lead. With 2 outs in the Tiger 5th and no one on Tiger second baseman Dick McAluliffe hit a solo home run closing the score to 4-3.

In the Tigers 6th inning Ray Washburn was removed after walking two hitters in a row after one out- reliever Joe Hoerner would come in and close the door the rest of the way for the Cardinals pitching 3 2/3rds innings giving up only 1 hit and 1 walk. The Cardinals would go on to add 3 runs in their 7th Curt Flood singled, Roger Maris doubled and Orlando Cepeda hit a 3 run home run. The Cardinals had a 7-3 lead and that would be the final.

It was a long game- 3 hours 17 minutes. 53, 634 attended the game at Tiger Stadium. The Cardinals take a 2 games to 1 lead over the Tigers. Game 4 would be Sunday October 6th with a match-up of the aces who started game 1- Bob Gibson vs Denny McLain.