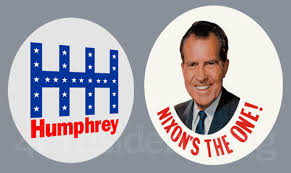 It was fifty years ago today- the Democratic nominee for President of the United States Hubert Humphrey proposed a series of three debates with Republican  Richard Milhous Nixon and American Independent George Wallace during a speech at Pepperdine College in Los Angeles. Humphrey really needed debates or something to get his campaign going because at this point in the campaign he was behind The Tricky One 43% to 28%. Nixon no doubt remembered his debates in 1960 with Jack Kennedy and how bad he looked in those debates- plus he had nothing to gain and everything to lose in debating Humphrey at this point- two days later turned down the proposal. Nixon was in his prevent defense and was trying to run out the clock.   Today it is a given that there will be presidential debates- there have been every election cycle now since 1976 when Ford and Carter debated.