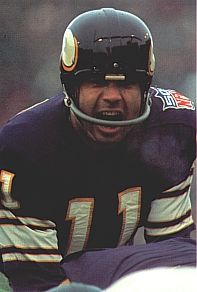 It was fifty years ago today- Saturday September 14, 1968 -the NFL season opened with one game- and it wasn’t much of a game- the Minnesota Vikings beat the Atlanta Falcons like a rented mule- 47-7. Vikings quarterback Joe Kapp threw for three touchdown passes and running back Bill Brown ran for 2 touchdowns and had a touchdown reception in the victory.

The NFL -AFL had announced their merger but it wouldn’t be until the 1970 season when they would play each other in regular season games. In 1968 there were 16 teams in the NFL- and 10 in the AFL for a total of 26 teams. Today there are 32 teams.

The defending champions going into the 1968 season- the Green Bay Packers -winners of the first two Super Bowls- would be entering the season without their legendary head coach Vince Lombardi who retired after the Packers won Super Bowl II being replaced by long time defensive coordinator Phil Bengston. The Packers opened up the season in fine fashion on Sunday beating the Philadelphia Eagles 30-13- the Packers Dynasty seemed to be still clicking. Other NFL scores- Washington Redskins 38 Chicago Bears 28, Baltimore Colts over San Francisco 27-10, Dallas who had lost two NFL championship games to Green Bay in 1966 and 1967 opened strong beating Detroit 59-13 and the Cleveland Browns beat New Orleans 24-10. The New York Giants beat my Pittsburgh Steelers 34-20 and the Los Angeles Rams beat the St. Louis Cardinals  24-13. A rather dull opening week to the NFL season-no close games- the closest game being 10 points.

In the AFL-  They started their season a week earlier -they had bye weeks back then and oddly enough 4 teams started the season with their bye week. There were only 3 AFL games. At this point in time- it was generally though- by the NFL fans especially that the AFL was years behind the NFL in talent and it would be probably a decade before they could even think of beating the NFL in the Super Bowl. The defending AFC champions- the Oakland Raiders would certainly be a front runner to go back to the Super Bowl- in SB III. In week 1- San Diego beat the Cincinnati Bengals in the Bengals first ever game 29-13, the Boston Patriots beat the Buffalo Bills 16-7, the Kansas City Chiefs an AFL power beat Houston Oilers 26-21. In week 2- Houston beat Miami 24-10, NY Jets beat Kansas City 20-19, the Cincinnati Bengals won their first ever game over Denver 24-10- the Bengals coach and owner was the great Paul Brown. The Oakland Raiders spanked the  Buffalo Bills 48-6.

One of the interesting side stories going into the season was which of the 26 teams would be the worst- and gain the #1 draft choice- and get to select the player who was seen as a game changing running back- the USC Trojans Orenthal James Simpson.