The other day MusiCommantator suggested I do a blog post ranking an artists albums from worst to best. He suggested The Beatles or Bob Dylan. I really like his idea and am going to run with it. I thought it would be easier starting with The Beatles since there are only thirteen albums to rank and then after that move on to other artists with bigger catalogs.

In ranking The Beatles albums I am only ranking the studio albums released during their years as a group. No greatest hits/ best of’s/ live albums, the Anthology Series the two past masters albums don’t count- etc. Just the albums Please Please Me to Let It Be. The UK versions of the albums since the earlier albums vary between the US and UK. Although I grew up listening to the US bastardized versions since I got the UK versions back when they were finally released in America those are the versions I listen to. It gets kind of tricky when ranking anything- am I ranking my personal favorites in order of what is the best? That can be a different ranking. The ranking in some cases will be kind of a blending of favorite/best if that makes any sense. There are no Beatle albums that I just plain don’t like. {Now when it comes to Beatles solo albums there are ones that sour me.}  I will make a different post on each album as the countdown goes- from #13 to #1.

#13. Yellow Submarine- Soundtrack: Released January 13, 1969. It was The Beatles 11th studio album. The album really isn’t what I would call a Beatles solo album. There are only four previously unreleased tracks on it. It was a soundtrack for an animated movie that they had very little to do with.  The first side was contained six Beatles songs- four new ones and two old ones- Yellow Submarine and All You Need Is Love. Side Two- is the 5th Beatle-producer George Martin scoring the film. It is competent and entertaining but it’s not The Beatles. As the critic at AllMusic Richie Unterberger has written it would have come off a lot better as a 4 song EP with the four new Beatles songs than with what it actually was.

The four new Beatles songs- Only A Northern Song- written by George Harrison. It was  song George had written during the Sgt. Pepper sessions but wasn’t chosen to be on that album. It was a throwaway- and when The Beatles had to come up with four songs to fulfill their contract for the movie- it was one they went with. Northern Songs was The Beatles publishing company and George was dissatisfied with his status in The Beatles as the junior partner to John and Paul in the songwriting department. George’s main target was Dick James who was the managing director of Northern Songs. I’ve always viewed the song as a likable but a throwaway- not a major song for George he had done better and would soon be writing a lot better songs than this.

All Together Now- is a Lennon/McCartney tune but mainly written by Paul and was sung by Paul and John. Another scrap they threw at the Yellow Submarine project. It had been originally recorded during the Magical Mystery Tour sessions. It is a fun song but not a major song in The Beatles canon.

Hey Bulldog is the gem of this bunch. One of the most overlooked great Beatles songs. Written and sung by John. It was written around the time they were filming the Lady Madonna promotional video. The original title John had for it was “You Can Talk To Me” and it was originally Hey Bullfrog- not Hey Bulldog. The song was built around a piano riff. Great bass from Paul. This song should have been released as a single. It gets my vote as most overlooked Beatles classic.

The final new song was It’s All Too Much written and sung by George. A psychedelic song- and much much better than Only A Northern Song. The song was influenced by George’s partaking in LSD. Another song recorded back in the Sgt. Pepper days. It is interesting how The Beatles throwaways they gave to this Yellow Submarine project could still be fascinating.

I rank Yellow Submarine at the bottom due to it’s only having the four new songs and half the album- while entertaining music- was not done by The Beatles. Over the years it is far and away my least listened to album The Beatles. It was the last Beatles album that I bought back in the day when I became a fanatic. Coming up #12 in the countdown. 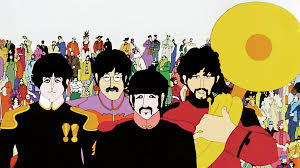