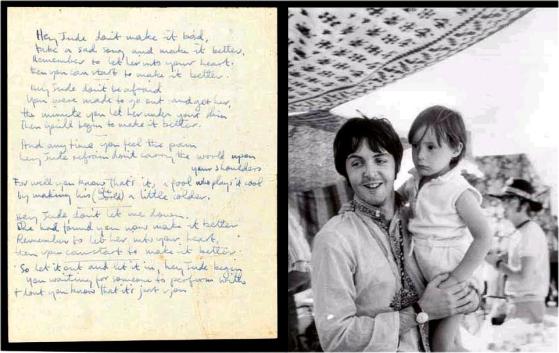 It was fifty years ago today- July 26, 1968  Paul McCartney and John Lennon finished up the writing of Hey Jude at Paul’s house in St. John’s Wood, London. Hey Jude would be recorded in the next month and would be released exactly a month after it was completed- August 26, 1968. It would go on to be one of the most successful singles of The Beatles career- holding down the #1 spot in the United States for a then record 9 straight weeks. The single was the first ever released on The Beatles- Apple record label. It would sell 8 million copies. It was not only a great commercial success but is usually on any short list of critics choices as one of the best singles ever.

John would later make comments saying he thought this song was Paul’s giving the okay for his relationship with Yoko Ono. Paul was inspired to write the song for John’s son Julian after visiting him after John and his first wife Cynthia had broken up.

3 responses to “IT WAS FIFTY YEARS AGO TODAY- JULY 26, 1968—PAUL MCCARTNEY AND JOHN LENNON COMPLETE THE WRITING OF ‘HEY JUDE””