It was fifty years ago today- July 1, 1968 a landmark album was released- the debut album by The Band. By the time their debut was released The Band were not new kids on the block they had been road tested – most famously as Bob Dylan’s back up band starting in the summer of 1965 and onwards. They were known at that time as The Hawks and later The Crackers. Dylan had his motorcycle accident and retreated to the Woodstock area of New York- and invited his band to come up and join him in early 1967. They rented a house in West Saugerties, New York. The house was a large pink house. Soon they were recording with Dylan first at his house then at Big Pink- these recordings would be the famous Basement Tapes. Levon Helm hadn’t rejoined the band at this point- he would arrive in mid-summer 1967. They needed to come up with a name for their group and they ended up choosing The Band because everyone called them the band when they were backing up Bob.

In early 1968 they started recording what would become their debut album. On the album that was released 50 years ago today- there are 11 songs- 3 were written or co-written by Bob Dylan. One of their best known songs they would  have is on this album “The Weight” written by Robbie Robertson  as a single it only reached #63 on the Billboard chart but has been a staple on FM radio over the years. It surprised me to see it wasn’t at least a medium sized chart hit. They would only have a couple singles reach the Top 40 but they weren’t that kind of band.

Who were the members in The Band? Robbie Robertson guitars and vocals- and the principal songwriter, Levon Helm-drums and vocals, Rick Danko- bass guitar and vocals, Richard Manuel- keyboards and vocals and Garth Hudson [the greatest Garth I can think of in music} keyboards and saxophone.} They had three great singers in Helm, Manuel and Danko- how many groups have three great singers? I am not talking three singers- these guys were great. Sadly only Robertson and Hudson are still living.

The artwork on the cover of the album- done by Mr. Bob Dylan 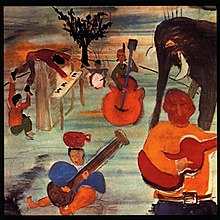 The album reached #30 on the Billboard album chart. John Simon was the producer of the album. I love this album but I even love their second album- The Band “The Band” even more- it has held a firm position in my all time favorite albums list since I first heard it. The first two albums by The Band- in one work – incredible. After that they fell off somewhat but still had interesting stuff worth listening too- but the standard of the first two albums never matched– but few have reached such heights. I don’t know if you can say this album or that album or this artist or that artist was the Godfather of Americana Music- but certainly the first two albums from The Band were big influences on the movement.

For a better write up today on The Band’s Music From Big Pink- my friend Introgroove made the following post earlier today– link below.