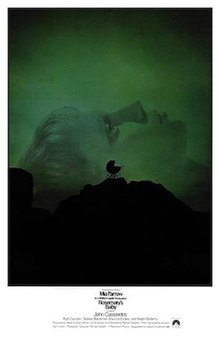 It was fifty years ago today- June 12, 1968 that the film “Rosemary’s Baby” premiered in the United States. The film written and directed by Roman Polanski was based on the book of the same name written a year earlier by Ira Levin.

The film was controversial- dealing with a pregnant woman {Mia Farrow} who feared a group of satanists wants her baby to use for their rituals. An outstanding cast highlights the film- Farrow, John Cassavetes as her husband, Ruth Gordon- she won the Oscar for best supporting actress,  Ralph Bellamy, Maurice Evans, Sidney Blackmer and the film debut of Charles Grodin.

The movie was famed at the famous Dakota apartment building in New York City. It cost 3.2 million dollars to make and brought in 33.4 million and was universally acclaimed by the critics. It was on television a few months ago and I had to watch it again. It holds up very well and even though having seen in a number of times over the years I couldn’t pull myself away from it. There have been remakes and sequels but they have been duds- the original is the one to watch.