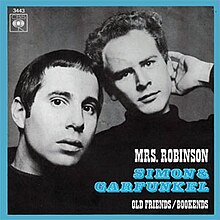 Fifty years ago today on May 28th, 1968 the #1 song on the Billboard Top 100 was “Mrs. Robinson” by Simon and Garfunkel from The Graduate soundtrack. “Mrs Robinson would be at #1 for three consecutive weeks.  The song also appeared on Simon and Garfunkel’s Bookends album. The #1 album was Bookends replacing The Graduate which had been #1 for six weeks.  For the next two months The Graduate Soundtrack and Bookends would trade places at #1 – Bookends #1 three weeks, The Graduate two weeks and then Bookends again for four weeks.

Sixteen different songs would hit #1 during 1968- the four greatest ones being- Dock Of The Bay- Otis Redding, I Heard It Through The Grapevine- Marvin Gaye, Hey Jude- The Beatles and Mrs. Robinson. Which one is the best?