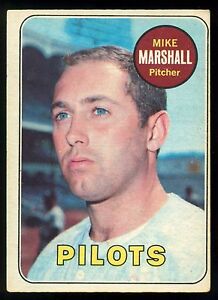 Mike Marshall’s first claim to fame was being a prominent figure in his Pilot teammate Jim Bouton’s groundbreaking  book – a journal of the 1969 season ‘Ball Four.”

Entering the 1969 season with the expansion Seattle Pilots- Marshall was twenty-six years old. He had pitched for the Detroit Tigers in the 1967 season- appearing in 37 games as a relief pitcher and was 1-3 with an outstanding 1.98 ERA. His road the the majors was a long one. He was signed by the Philadelphia Phillies in 1960 [this was in the years before the MLB Draft} never made it to the Phillies major league team and was sold to the Tigers in 1966. Following the 1968 season in which Marshall didn’t play in the majors- he was selected by the Seattle Pilots in the expansion draft.

Note on the 1969 baseball cards- in two of the players I have profiled so far- you see Mickey Stanley and Boog Powell in their teams uniform. With Al McBean who was on the expansion San Diego Padres and with Mike Marshall what you get are face pictures with no ball cap on- since Topps had no pictures with them with their new teams when they had to get the cards ready.  What ballpark is in the background of Mike Marshall’s picture? The picture was taken at old Yankee Stadium- notice the famous facade up in the left hand corner.

In 1969 Marshall was mainly a starting pitcher with the Pilots-[ if you aren’t much of a baseball fan you might be thinking Seattle Pilots? Never heard of them but I have heard of the Seattle Mariners.- the Seattle Pilots lasted only one season in Seattle before being moved to Milwaukee and becoming the Milwaukee Brewers. The city of Seattle would sue Major League Baseball and the city would get a new team- the Mariners in 1977.}

1969 was a different world in a lot of ways- in baseball the minimum salary a player could be paid was—- $10,000 and the average salary in baseball was $24, 909. Fifty seasons later the average major league salary is $4, 097,122. Yes over $4 million the average with the minimum a player can make being $545, 000. No one in 1969 no one- note Willie Mays or Henry Aaron came close to making that- Willie Mays made $135,000 in 1969 the highest paid player. I am getting money issue because in thinking about Mike Marshall I am also thinking about Ball Four because Mike Marshall was a key personality in Bouton’s book.

Bouton and Marshall were not liked by baseball management. Baseball’s ownership and management at the time liked to try and make the players think they had their best interests at heart.  “We’ll take care of you- just sign on the dotted line.” Bouton and Marshall were smart guys who knew better so to management they were damn communists trying to stir things up. “How dare you ask for a raise of $2,000! How dare you question our intentions.” No doubt a lot of players at the time knew they were being screwed over, some just shrugged their shoulders and decided it was best not to take a stance- a bad year could cost me my job in MLB. Some players were probably just happy to be playing baseball and didn’t give it much thought and then you had the guys like Marshall and Bouton who were a pain in the neck- clubhouse lawyers was the term that would be used on players like them. These fellows had radical thoughts and they put ideas in other players heads. Ideas ownership didn’t want brought up. The ultimate troublemakers to the owners of course would be a player named Curt Flood and the new players representative a lawyer named Marvin Miller. Those fellows would upset the whole apple cart. I will write about those two at a later date.

Mike Marshall would attend Michigan State University-eventually earn three college degrees including a Ph.D in  kinesiology.- so it’s Dr. Mike Marshall. This fellow just didn’t fall off the turnip truck and have a baseball uniform put on. He intimidated managers. In Ball Four Marshall is quoted of saying  “The minute I approach a coach or a manager I can see the terror in his eyes. . . . What’s it going to be? What’s this guy want from me? Why can’t he be like everybody else and not bother me?

I feel like I am writing a book on Mike Marshall here and I don’t mean to- so let’s cut to the chase- in 1969 Mike Marshall was just an intellectual ballplayer trying to keep a job in major league baseball. He had a horrible year. But Marshall wasn’t just going end up being a great character like Steve Hovley in Ball Four {Hovley another non conformist ballplayer who probably thought too much for his own good as far as management was concerned. Hovley was not only viewed as some commie but he let his hair grow long- a commie-hippie. How did baseball survive?.}

Marshall finally put it all together- as a relief pitcher having his greatest success with the Montreal Expos, Los Angeles Dodgers and Minnesota Twins. He would lead his league in saves in three seasons- but the season I want to talk about is his 1974 season with the Los Angeles Dodgers.

Mike Marshall- 1974- Los Angeles Dodgers. About once a year Quinn and I will spend about an hour in conversation over Mike Marshall’s remarkable- science-fiction like 1974 season. Mike Marshall was always trying to convince his managers what he needed was more work. He did have that degree in kinesiology-the study of the mechanics of body movements. Marshall’s big pitch was the screwball. No doubt many baseball executive thought of Marshall as just that over the years. Does any pitcher today even throw this pitch? Anyhow- back to Marshall and his fantastic 1974. Marshall was thirty-one years old in 1974. There are 162 games in the baseball season. As a relief pitcher that season Mike Marshall set a record that still stands- he pitched in 106 games. He averaged nearly 2 innings for each appearence 208.1 innings pitched. Another record he set that year was his appearing in 13 consecutive games out of the bullpen. Just to compare this all to 2017. In 2017 two pitchers pitched in 79 games for their teams Peter Moylan pitched in 79 games and a total of 59.1 innings. Bryan Shaw of Colorado was a real workhorse in his 79 games he pitched 76.2 innings. The most innings in 2017 by a relief pitcher was Yusmeiro Petit  of Oakland with 87.1 innings pitched. That isn’t even half of the workload Marshall took on in 1974.

Mike Marshall won the National League Cy Young Award in 1974. His record was 15 wins 12 loses and a 2.42 ERA. He saved 21 games. This was before the days of closers coming in to pitch 1 inning and getting a save. Managers didn’t care about such stats. Marshall would regularly come in and pitch 2 or 3 innings at a time.  He also finished 3rd in the National League MVP voting.

For his career Mike Marshall would pitch for nine teams finishing up with the New York Mets in 1981. He would make two All-Star teams in 1974- and 1975 as a Dodger. He won 3 Fireman of the Year Awards. He led his league in saves three seasons- 1973 and 1974 as a Dodger and in 1979 with the Minnesota Twins.

Following his incredible 1974 season he considered leaving baseball to go work on his Ph.D. He of course didn’t.

He was a teammate of Tommy John’s as a Los Angeles Dodger and if you follow baseball at all you know the name Tommy John- as in Tommy John Surgery. When John was injured and his career in serious doubt it was Mike Marshall who convinced him to have the radical surgery that would bear his name- and also save and prolong his career.

There was another Mike Marshall who played for the Los Angeles Dodgers- and outfielder who played in Major League Baseball from 1981-91 whose claim to fame was dating Belinda Carlisle of The Go-Go’s early on in his career.

After his career was over baseball finally came to their senses and realized what an asset they had and he’s been a pitching coach every since- NO -just kidding- Marshall who would probably have made a great pitching coach has never been employed by any team since. There is a Warren Zevon song about former Red Sox pitcher Bill Lee called “Bill Lee” that goes “You’re ‘supposed to sit back and nod about stupid things man that’s hard to do” Baseball doesn’t like change- baseball doesn’t like original thinkers or people who have new way and possibly new ways of doing things- baseball is slow to change. It does change but it’s a slow change, like when the continents drifted apart millions of years ago. Mike Marshall has had some interesting ideas on pitching, how to use pitchers, how pitchers should throw etc.

The following is taken from wikipedia–

Marshall teaches and advocates a pitching method he developed that he “believes could completely eradicate pitching-arm injuries.He wants pitchers to have a smooth transition. To pitch the arm has to externally rotate (hand lays back) before the ball accelerates. With traditional pitchers the thrower often lifts his elbow before his hand (also called scapula loading); this leads to the ball coming up late and the arm to externally rotate late. The elbow will be accelerated forward while the hand still goes backward, which creates enormous stress on the arm.

Marshall instead wants pitchers to externally rotate early as they swing their arm up. That means the pitcher will lift the hand before the elbow, so that the wrist faces away from the body and up, the hand is above the elbow when the front foot touches the ground, which leads to a smooth transition without a “forearm bounce”, as Marshall calls it (Marshall believes this causes UCL injuries, which require Tommy John surgery). He wants to first lay back the forearm and then accelerate by rotating the body instead of bending over, in order to protect the elbow against injury.

Mike Marshall is still very much alive- at age 75. 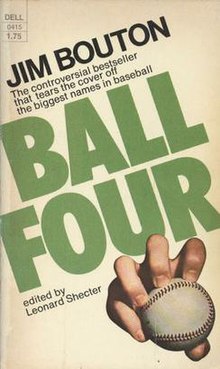 I mentioned Ball Four a number of times in this write up. I would recommend Ball Four for any baseball fan who has yet to read it. I have lost count of the number of times I have- usually every couple years. It has to be my favorite book ever. I will write an appreciation for it soon. Even if you don’t care for baseball I’d recommend it. Great read.

Note- Mike Marshall and Jim Bouton’s ex-wives would get together and write a book themselves in the early 1980’s about their ex-husbands and the baseball life called “Home Games.”