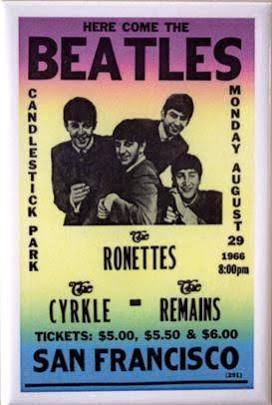 On this date fifty-one years ago- August 29, 1966 The Beatles gave what would be their last official concert – the site was Candlestick Park in San Francisco.

Tickets to the concert sold for between $4.50 and $6.50. 25,ooo bought tickets for this concert. The capacity of Candlestick Park was 42,000 so there were large sections that would be empty. In some ways 1966 was The Beatles at their peak- they released earlier in August what many feel is not only their greatest album but the greatest album anyone has ever released- Revolver. But the concert tour they went on was a nightmare. The terrible experience they had in The Philippines where they literally just got out of the place alive- to the American tour which was marred by John’s ” The Beatles are bigger than Jesus” controversy. By San Francisco The Beatles had had enough and although there was no actual public statement at the time-The Beatles knew themselves that this was the end of the line as far as concerts go. Both John and Paul took cameras out on stage-to get pictures, they knew this was it. George Harrison later said –

“Before one of the last numbers, we actually set up this camera, I think it had a fisheye, a wide-angle lens. We set it up on the amplifier and Ringo came off the drums, and we stood with our backs to the audience and posed for a photograph, because we knew that was the last show.”

Rock and Roll Music/ She’s A Woman/ If I Needed Someone/ Day Tripper/ Baby’s In Black/ I Feel Fine/ Yesterday/ I Wanna Be Your Man/ Nowhere Man/ Paperback Writer and Long Tall Sally.

It’s a shame The Beatles concerts after they became big- were more events- spectacles than actual concerts. If you wanted to see what The Beatles were really like live you would have to have been one of the lucky fans back in Liverpool before they made it big to know what it was really like.

The Beatles went back home to England to an unknown future. The thought to that they could continue without touring at that time seemed like a strange idea but that is exactly what they would do for the next three plus years. They would go back to the studio and create some of their greatest music.