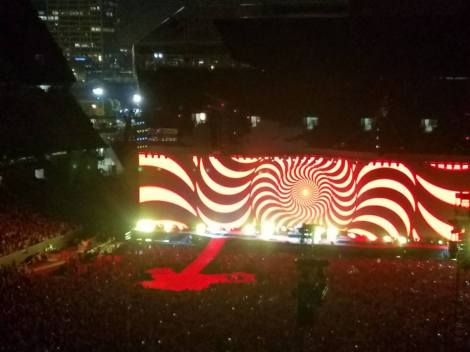 Yesterday a friend and I went up to Cleveland to catch our second U2 show on their Joshua Tree Tour. From the above picture you can see we didn’t have the prime location of our Pittsburgh show of a couple weeks ago.

Finding out seats was an adventure in itself- not only for us but it seems like with everyone in the two sections in our area. I’ve been to stadiums all over the country and give me a ticket and it’s never hard to find the seats except in Cleveland. They seem to have added two sections- that are all by themselves. They are labeled 622 and 623. They are below the 500 level. They have one way up and the same way down but its not marked well. It took us a good 45 minutes to find the seats. Every stadium I have been in have had ushers all over the place and employees stationed around to help you. Not here.  We finally found someone and he was able to get us in the general direction. We came across one guy who just told us ‘sit anywhere” [ the concert was a sell out} He had no idea where our seats were.  When we did get there we spoke to about a dozen folks who had our problem. Anyway. Once we got there we didn’t leave- who knew if we’d ever find out way back. The stadium overall seemed kind of poorly designed. It is the home of the Browns- maybe that says it all.

Anyway the opening group was One Republic. I know these guys have had a number of hits in the last ten years but I am not that familiar with them. They were pretty good for an opening act. The vocalist voice -well I will just say I bet Bono these days wishes he could hit those notes.

U2 came on about 9:30 and played until about 11:40. The set list is below. There were a few changes from the Pittsburgh show- Vertigo and Mysterious Ways were added. I enjoyed the show more in Pittsburgh- probably due to our being close but both shows were strong. One thing we noticed Bono last night seemed to have problems at times not only hitting some notes but it sounded like he was struggling with his voice. This was the last American tour stop for the moment- maybe he needs to rest the voice for a while. Overall no -no complaints. I don’t know if I would see them again on this tour- just because it was basically a repeat of the other concert. Twice was enough.

One nice side note- there was a couple seated next me who brought their two young children a boy who I guess was 7 and a little girl maybe 4. Before the show they asked us “Guess who we met?” Turns out before the show outside they met U2 when they arrived for the show. They showed us a picture of Bono and the little girl. She had pink sunglasses and in the picture Bono and the little girl had traded glasses. The boy had an autographed picture of Bono. The father was just going on and on about how Bono was so nice to everyone and humble. He also said he was big. Well the father was kind of small maybe Bono was big compared to him but come on Bono is a little fella. The family seemed to have a good time the little girl was up and dancing.  I hope she will have a memory of meeting Bono. She will have the picture.